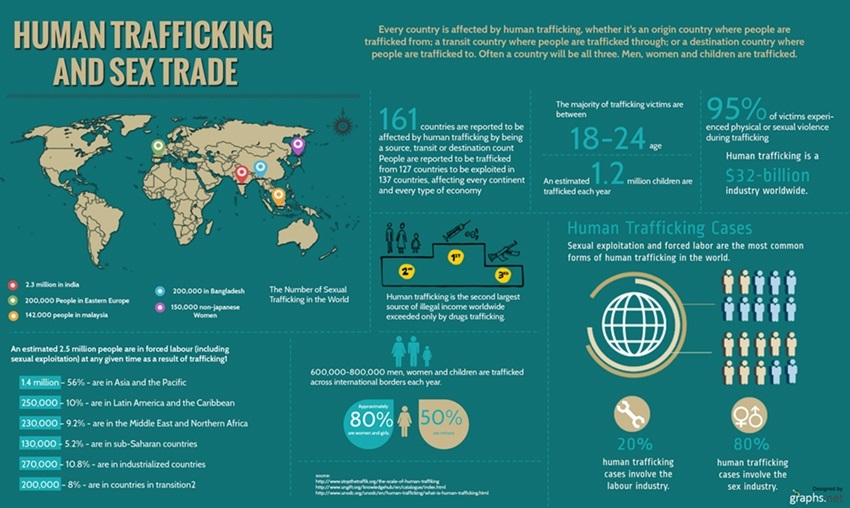 Explore more infographics like this one on the web's largest information design community - Graphs.net.

It is important to note that in addition to the trafficked victims described in the infographic above, there are numerous more who are enslaved. Many consumers around the world innocently support slavery based on the food, clothes, and technology they buy.

According to a Reuters magazine article:

The $80 trillion purchasing power that businesses have are the key to ending modern day slavery and its $150 billion profit.
While there have been 1,199 modern slavery prosecutions worldwide, this is significantly less than the number of actual modern slaves in the world.
In order to end support of modern day slavery, people must give up their addiction of cheap, fast fashion.
Forced Child Labor
After discovering that child labor was a major problem in their cocoa sourcing from the Ivory Coast, Nestle has decided not to own cocoa farms in that region. More importantly, they have focused on alleviating the problem by tackling the perceptions of those in the supply chain there.

The FLA is a non-profit that is a collaborative effort from universities, civil society organizations, and businesses. To view an international list of participatory organizations with FLA, click here.

In addition to ending child labor, much investment must be put towards providing rehabilitation and educational programs for former child laborers. Below is a video of one initiative from UNICEF aimed at bringing child laborers back to school in Bihar, India.

In addition, the FLA has also completed audits on FoxConn on Apple’s behalf, and Domini has worked with Apple to address the problems from these findings. Domini and Calvert both became part of the effort to persuade Apple to join FLA.

Calvert has addressed similar issues with Apple, Foxconn, and Microsoft, who is also sourced by FoxConn. Along with Domini, Calvert has also been a member of Gap’s Public Reporting Working Group, engaging with Gap on trafficking legislation as well as worker safety in Burma and Bangladesh, particularly with regard to the Rana Plaza disaster.

Calvert was also invited by McDonald’s to provide input on its Supplier Code of Conduct. Calvert also convinced McDonald’s to support reasonable increases in wages.